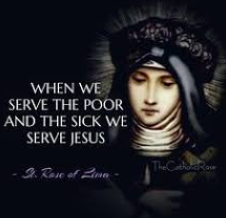 Gaspar de Flores and his wife, Maria de Olivia, were proud of their daughter. She was born April 20, 1586, and was baptized Isabel de Flores. One day, a maid exclaimed that she looked just like a rose. Isabel’s mother declared that this child would be called “Rose” from then on. Isabel took Rose as her Confirmation name.

Rose liked to work in the garden. She also learned to embroider on silk and to create designs, usually of flowers. Rose took Saint Catherine of Siena as a model. Even as a child, she wanted to live only for Jesus. She looked for difficult things to do to show her love for him. She also built a prayer hut for herself in the backyard. Then her parents experienced financial difficulties.  Rose found an answer to this problem. To help her parents, she stayed home and sold her needlework and the flowers she raised, but she joined the Third Order of Saint Dominic as well. She began to live in her hut. In her parents’ home, she set up one room as a free medical clinic for children who were poor and people who were elderly. This became the beginning of social service in Peru.

In the last years of her life, Rose became very ill, and she died on August 24, 1617. By then, she was widely known and loved by both rich and poor people.